I have been thinking recently, for reasons I can’t quite identify, about nuclear weapons. Perhaps it’s because, as this website points out, of the way some Christmas decorations resemble MIRV warheads. 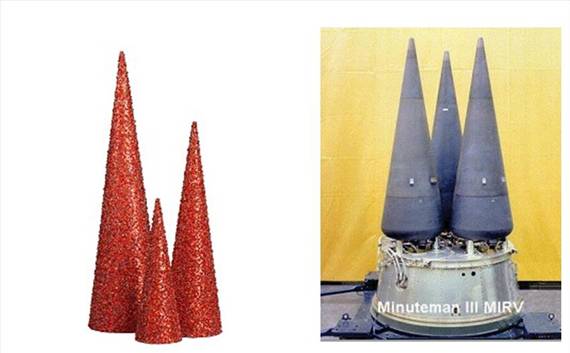 Perhaps it’s also the beginning of a new year of the ‘War on Terror’ (or ‘Global Struggle Against Violent Extremism,’ as the White House now prefers), and the contemplation of those Cold War years when we knew who our enemies were, where they were, and precisely how they were going to anihilate us. (We could take comfort, also, in the thought that we were certainly going to anihilate them, too.)

I lived in New Mexico back then, and knew several sites less than fifty miles from our home that were sure to be high on Soviet target lists. Sandia Labs, for instance, was right outside Albuquerque, and on the other side of the city was the Four Hills complex, where ‘inactive’ nuclear warheads were stored. From the highway into the city we could see the broad lanes of concertina wire cutting across the rocks and scrub of the hills. It was part of the folklore of the place, something older kids would always point out as we drove by to younger kids or out-of-towners who might not have heard the story yet. I grew up in an odd sort of place, and was perhaps a little too knowledgeable about nukes when I was a kid, but anyone who read the news back then had to know a fair amount about nuclear weapons technology, like what ‘MIRV’ stood for, for example, or how the MX ‘Peacekeeper’ missile was going to be deployed.

We also knew, or thought we knew, what the first stages of a nuclear war might be like. There would be little or no warning, probably, from the government. Even if there was, it would take only fifteen to 30 minutes for the first warheads to arrive after they were launched. The ‘boost phase’ of each missile would last 5 minutes or so, as rockets lifted their warheads above the atmosphere. A relatively long and quiet ‘mid-course’ phase would follow, as the warheads, now separated from their boosters, drifted through space for up to 20 minutes, until diving into the atmosphere again for the aptly named ‘terminal’ phase–the five-minute plunge to their pre-set detonation altitude, probably a few hundred feet above major cities.

We debated sometimes whether, if we had any warning of a coming attack, which direction to drive in–away from or toward likely blast sites. Probably we would have done neither, just waited, but I’m glad the debate was never more than a dark sort of parlour game. Nuclear war was a serious enough worry, though, to keep me awake some nights. Or, worse, to wake me suddenly some mornings, thinking that perhaps the light streaming into my eastern window was not a car on the highway or the sun coming up, but the false dawn of a fireball behind the Sandia mountains, as Albuquerque was incinerated.

The arms control agreements signed between the US and the Soviet Union in the last decades of the 2oth century, the rise of Mikhail Gorbachev and, with his fall in 1991, the collapse of the Soviet Union, I remember as some of the most important moments of my personal history, as well as landmarks of global history. The world seemed to have entered a new phase of existence, filled with hope and promise. Warheads were de-armed, missiles left un-targeted, bombers taken off alert; nuclear weapons and nuclear war began to sink in my current-event consciousness beneath the sea of more mundane politics. The tragedy of September 11, 2001, pushed nuclear weapons further away from my attention.

But not completely. It’s common to hear talk of how the end of the Cold War ushered in a new, more dangerous world order, filled with all kinds of threats we are only beginning to understand, much less defend ourselves against. As terrible as their imaginations are, however, terrorists and rogue states will be hard-pressed to match the destructive possibilities of nuclear war. It’s worth remembering that, and its worth remembering that nuclear weapons, though reduced in numbers, have not disappeared.

So I have been wondering, what’s happened to all those nuclear weapons? There are still lots of them out there, and in a future post I’ll try to sum up the current state of the world’s nuclear stockpiles and the efforts to reduce them–efforts that were once the very public centerpiece of our national security policy.